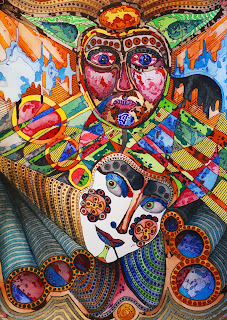 New watercolor, just finished. Available to purchase for 580 €. I know it's cheap, but I don't want my art to ruin people's economy. After all, those wealthy art buyers are living on noodles to afford their passion. It's called Damaskus, a play with words regarding the motif: a mask has fallen from the face of someone who is embarrassed to be seen as who they really are. It can also relate to the war in Syria with the gun barrels in front. I would say my art is a form of divination, where I sit down and just let the mind roam free and follow the movements of the hand. I never know beforehand what the motif will be. I don't plan my art, not consciously anyway, maybe subconsciously. The art grow and evolve throughout the creative process. The image can of course be interpreted in a multitude of ways, depending on who is looking and what interpretative preferences they have. The fragmentation of the reality when the mask falls. The heavy weight upon the head. The sound waves. Perhaps of sound from bombs, literal or emotional/mental. What are people saying? Word bombs. The decoration of the guns and the golden lining in the bottom. Is war beautiful? If this had been a tarot card it would be The Fool.  A theme that is reoccurring in my art. Analyzing your own art is a form of psychoanalysis as well. What am I afraid that people will find out about me? What does my mask consist of? Make -up perhaps? I never leave home without make-up, because as a Scandinavian I have a red pig face. Because of the rosacea as well. Pigs are cute though, nothing bad on pigs. 💕