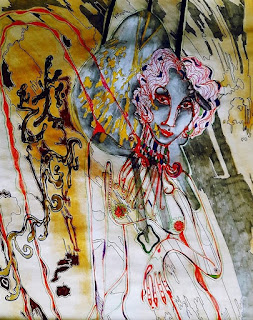 It appears I have become a monthly blogger, one post per month. Talk less, think more, act more, or? Currently reading Carl Gustav Jung, as part of the religious studies, which also includes religious psychology. Synchronicities as a concept and phenomenon is an essential part of the 'new age' worldview. In psychological terms synchronicities are explained as when an outer occurrence corresponds with an inner occurrence in a meaningful way. Jung explained it as a non causal unifying principle and had troubles coming to terms with what it actually entailed. He thought that is was intellectually unthinkable because it demanded an acceptance that the self and outer matter, the universe, are the same. An idea that is foundational for many religions and perhaps foremost 'new age'.  Even Darwin accepted that humans are a part of  the evolutionary chain on the planet. Not to mention quantum physics, we are according to science as we know it all made of the same matter. So why is it difficult to accept that humans are able to perceive 'outer parts' of the self? Synchronicities are not always of this nature, they can also be just seeing similarities, patterns and structure as a part of the logical analytical thinking. But, it's our preconceptions of reality that gives random synchronicities a meaning. People who are religious tend to see synchronicities as signs that they are on the right path in life, others might interpret them differently. For example, if I think about something and then a car passes me with a word written on the side that corresponds with that thought, I either accept that this how reality works (as this phenomenon happens to me a lot in various forms) or I begin to think about the impossibilities of this happening so often and I start to question how this reality works. It's always a wtf moment anyway, but an enjoyable one. I might wonder if the universe is solipsistic.

The attached painting belongs to my aunt, but she hasn't received it yet. Also interesting to analyze from an anima-animus perspective. It's also available as prints on a variety of 77 items.

Have a nice evening.