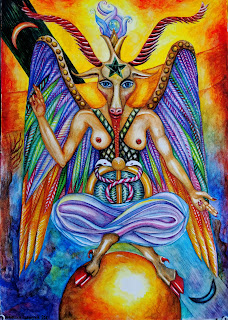 Is it done yet? I don't know, not sure, I could work on it some more with pencils and shadows. This is what I would call a lightwashed devil, a traditionally 'dark' icon portrayed as a mainstream 'new age' rolemodel. It is an interpretation of Eliphas Levis 'Baphomet' painted on demand for a book. The interpretation was not specified though, so the outcome is what came out spontaneously. However, in my other artworks I usually overwork the picture with pencils, as I cannot resist the satisfaction it brings with all those defined edges and lines. Here the background is left a bit mysterious. Well, it might go under the pen when I return home. Right now I am up in the northern parts of Sweden where it is icy cold. A journey that took 11 hours by car. I started at 9 am to catch a few hours of light, but already in the afternoon it got dark and the roads got more slippery and hazardous the farther up north I came. At a roundabout in a larger city a guy accidentally bumped into my car.  I drove to a gas station nearby and he followed after, There we exchanged information, wished eachother Merry Christmas and went on with our different journeys. I think we were both a bit shocked by the incident, but nobody got harmed so it was no big deal. My car got damaged in the rear bumper, so that will need to be fixed. Luckily we both had insurances at the same company, so that is already covered.  So wherever you are stay safe on the roads and drive carefully. The risk of dying in traffic I'm pretty sure exceeds the risk of dying in covid. Guessing without checking the facts. Is there an expression for that? In Sweden we say 'killgissa', which is an ironic expression mainly describing men who are 'mansplaining' without checking the facts.
Next year is 2022. Now that is a solid number.
All the best
Angelina