The old music is new again 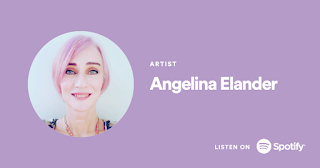 I'm happy to announce that I have released a lot of tracks on Spotify and iTunes and probably more platforms than I can keep track of.  The music that I have re-released now is very old, but it's nice to have it out there and not just eroding on ancient cd's. Two albums were released now on July 22 and a third is due on August 22. The newer music is on it's way and will be released when I'm done with assembling an album. I still have a few weeks of non-academic time to use up. The music I have made is for my own amusement and follows my own creative pursuit.  I wanted to create something new, mystical, magical, absurd and even funny to begin with. Then I had a period where the lyrics became more important, with a bit of rebelliousness and break-up vibes ( very embarrassing as well). I'm mostly embarrassed by my music, but still proud to have managed to compose a few inspired tracks. These old releases are created with the programs Rebirth and Cubase with a Yamaha synthesizer and vocals on top of that.  Regarding my experimental vocals on these tracks, they are just that, experimental. I was tired of my choir-conditioned voice and wanted to transform it back to my own unique sound, which took a lot of growling at times.  The newer music have better sound and is created using various loop and sample apps and then assembled and mastered in Audition. Working on connecting the midi and finding satisfying sound banks to add. Unfortunately, or thankfully, I can't record any vocals at my current location as it would cause too much disturbance for my poor old mother.  All the tracks are also available on TikTok, Instagram, Facebook and YouTube to add as background music to reels and whatnot. I have renamed many old songs to moods or functions to make them more compatible with social media platforms. Listen, use and enjoy.

Master in Environmental sciences ( environmental communication and management). Artist. Animal rights defender. Semi-opinionated person. Funny and cute. This website is about things I find interesting to discuss. It can be current events, new research, personal reflections, trends in society, specific issues and random stuff. Not too seriously. Life is also to enjoy.