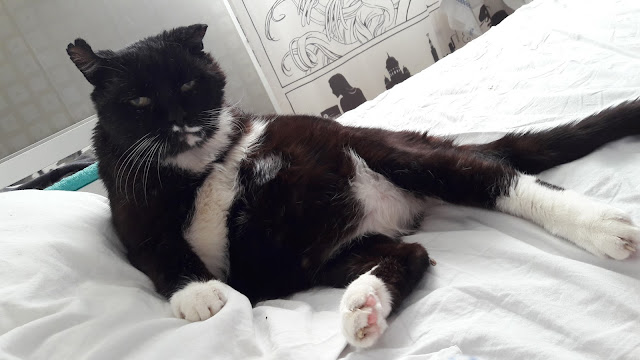 It's a new year and a new age. The biggest problem I have right now is to remember to write 2023 and that I am 53 years old. I suppose bigger problems are available to examine if desired, by why go there? From a perspective of personal development it is of course very constructive to purposely dive into your own personal darkness, but I have done that so many times already. I'm ready to see the light, face the sun, getting used to being happy. I worked really hard in 2022 , but have nothing to show for it. Some years are like that, perhaps some of the work I did last year will be published this year. I did manage to publish most of my music. I mostly took care of my sick mother, who has recovered from cancer btw, with a good prognosis. I will not take credit for that, but we all know it was me. 2022 was a very physical year. I don't think I have ever spent so much time at the gym as I did last year. Some rest was due. However, I am continuing my studies and it's always inspiring when you find someone who triggers your interest and can offer different perspectives in the same fields of interest. It's a shame he's married, but maybe my yellow dress will do the trick. I have a two complaints though, sloppily formulated and without references.

1. The idea that patriarchal oppression has been a lie, that men has actually worked harder and suffered more than women, how is one supposed to measure that when it's impossible to know the level of suffering of historical individuals if there is no documentation of it?  We can for example assume that van Gogh suffered substantially, cutting off his ear and all, but what about the women he encountered? How many were they and did he or did he not mutilate them as well? My point is that the history of women has been silenced.  Claiming that men suffered more, worked harder and therefore earned their positions is based on the history of a few selected men who had the incredible privilege of being published and is therefor wrong in terms of generalizing history from a gendered perspective. This is perhaps a question for archeologists and osteologists to answer, who can tell from osteological analysis how much men has suffered in comparison to women.  Even then it would not debunk patriarchy.

2. The argument that fossil fuel has been beneficial for the betterment of human living standards in the essence of being a sustainable environmental argument is not valid as such, because what is good for humanity is not necessarily good for nature. It can be, but it does not equate.  How many animals must go extinct for humanity to uphold a extravagant lifestyle? Is the planet for humans only? It's not a question of value to maintain biodiversity, it's a necessity for human survival.  Unless we are happy to see ourselves as a dying inbred species, seeking refuge on other habitable planet as a form of Utopia. However, if one wants to point out how environmental racism is being played out by the climate change hegemony, it can be used as such, where banning of fossil fuel leads to increased impoverishment of the third world countries. It can be seen as a form of hidden environmental racism, where climate change is used as an argument to keep the poor poor.

I know much research is paid for and unreliable, but one can't dismiss all in favor of a desired outcome. It is clear that we want to maintain our lifestyle, at least, and we want more, better, faster. It is also clear that as soon as a power agenda or hegemony surfaces, as climate change, it will be used for power purposes. But that does not mean that it is all wrong, that all those people wanting to preserve a healthy environment are 'woke-leftists', or should be stereotyped at all. Stereotyping is a derogatory practice, and so is name calling and body shaming. Most social media guidelines will state that out for you, Jordan. However, I do agree that children should absolutely not be subjected to any form of gender transitioning treatment, because they are children and uncapable of making such a decision.

Master in Environmental sciences ( environmental communication and management). Artist. Animal rights defender. Semi-opinionated person. Funny and cute. This website is about things I find interesting to discuss. It can be current events, new research, personal reflections, trends in society, specific issues and random stuff. Not too seriously. Life is also to enjoy.